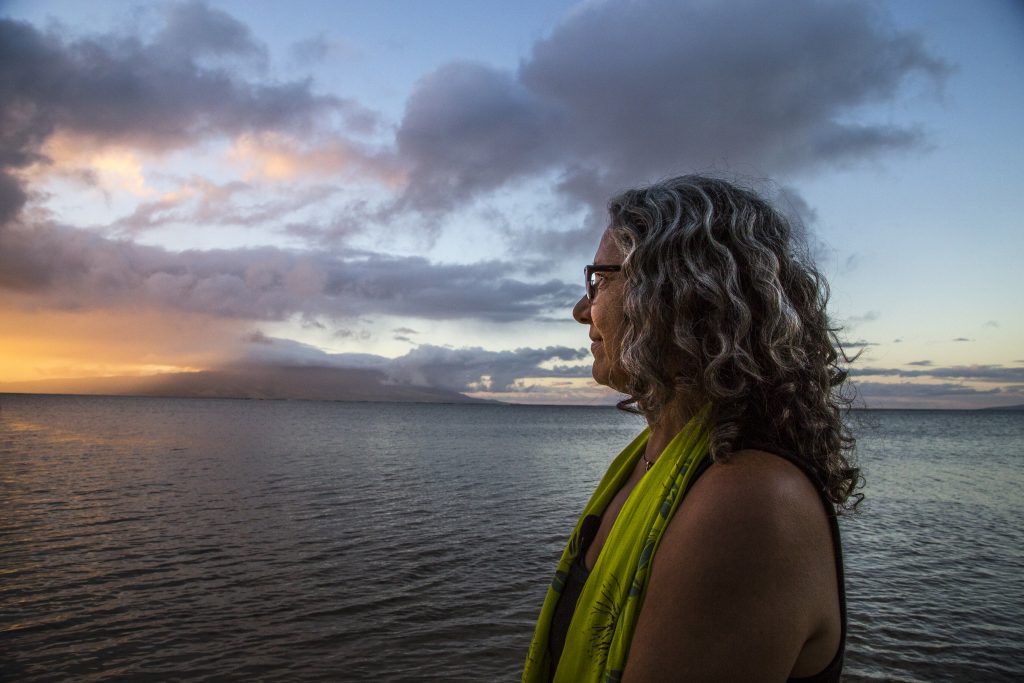 Zelie Duvauchelle was born and raised in Puko’o, east end Moloka’i.  She is currently working on her album entitled “Hu”, which means ‘to pour forth’.

For the last twenty years she has been performing, composing songs, and preparing for this album.

Duvauchelle’s big news is that her album will be co-produced with recording engineer Milan Bertosa. Bertosa recorded Israel Kamakawiwo’ole singing ‘Over the Rainbow/What a Wonderful World’ and ‘White Sandy Beach’ for the first time in a spontaneous late-night studio session in 1988. He was also the sound engineer for many of falsetto singer Kindy Sproat’s recordings. He will record her singing and playing ‘ukulele in August at her ocean-side home in Puko’o.

Being in my grandparent’s garage with all my aunties and uncles. There was a party and my aunties were dancing — just getting up and dancing, and my uncles were playing music. I was playing with the other kids.  My auntie Mary was doing the “Bottle”dance, which was a naughty hula, and the adults were laughing so hard, I ran over to watch. I don’t remember the exact song they were playing. There was an empty whiskey bottle and they tied it around Auntie Mary’s legs, they rigged it somehow with nylon stockings, I think. Whenever she would do an ‘uwehe the bottle would go up her mu’umu’u. I was small, and watching this bottle go up and down under her dress. My grandma them were laughing so hard they were crying. She was real kolohe, my Auntie Mary, and as she got older she became real religious, and when I tried to talk to her about it later she said “shhhh, we don’t talk about that.” I’ve never seen anyone else do that dance.

Who has influenced you most?

As a musician, I would say Kindy Sproat. He was married to my dear friend Cheri, and I did an apprenticeship with him through the Hawaii State Foundation on Culture and the Arts. I would fly over from Molokai to the Big Island, sometimes for a week or for a weekend and stay with him and Cheri. He would sing songs and tell stories, and I recorded the songs, and I would play them back and sing with the recordings to learn the songs.

He taught me about kaona in music, the hidden and layered meanings in songs. He had a deep love for Hawaiian music, and he passed that love on to me. I listened and learned how much our Hawaiian ancestors loved nature and flowers and birds and the ocean and love making. Every thing that we Hawaiians sang about, was all of this love for this place and each other, and that was the great gift he gave me, was this love for the land, and nature, and things unseen. Now my music reflects that love.

Q. What does music do for you?

Writing songs marks something important in my life. I’ll write a song about something, or things, in my life that I am really passionate about or some event in my life, like paddling around the island for example. My song Ka’apuni ‘O Moloka’i is a record of a paddling trip around Moloka’i. And now every time I play that song I can recall the whole trip. Because I wrote about it, and I sing about it, I can recall that event over and over again, so it helps mark something in my life, something precious to me.

Music also feeds me. It’s been a healing salve for me. It’s been something that when I am going through difficult times, I could always sing and be uplifted. It provides spiritual connection and it allows me to express my relationship with everything in nature including people.

It makes me happy, it enlivens me. There is something about singing that opens me up, opens my heart.

Q. How is Molokai present in your music?

Moloka’i is present in all of my music. Because I am a product of Moloka’i, I was born and raised here, it is in my being. So when I sing or play or write songs, that essence of Moloka’i is always in there.  Because it’s in my cells and in my bones. It can’t help but come through in the music, no matter what I am singing. No matter where I am, I take Moloka’i.

There is a certain kind of quiet, and stillness and spaciousness and potency that comes with being raised here. It is the energy of Molokai Nui a Hina, Moloka’i Pule O’o. It’s just part of who I am.

Want to join the discussion?
Feel free to contribute!